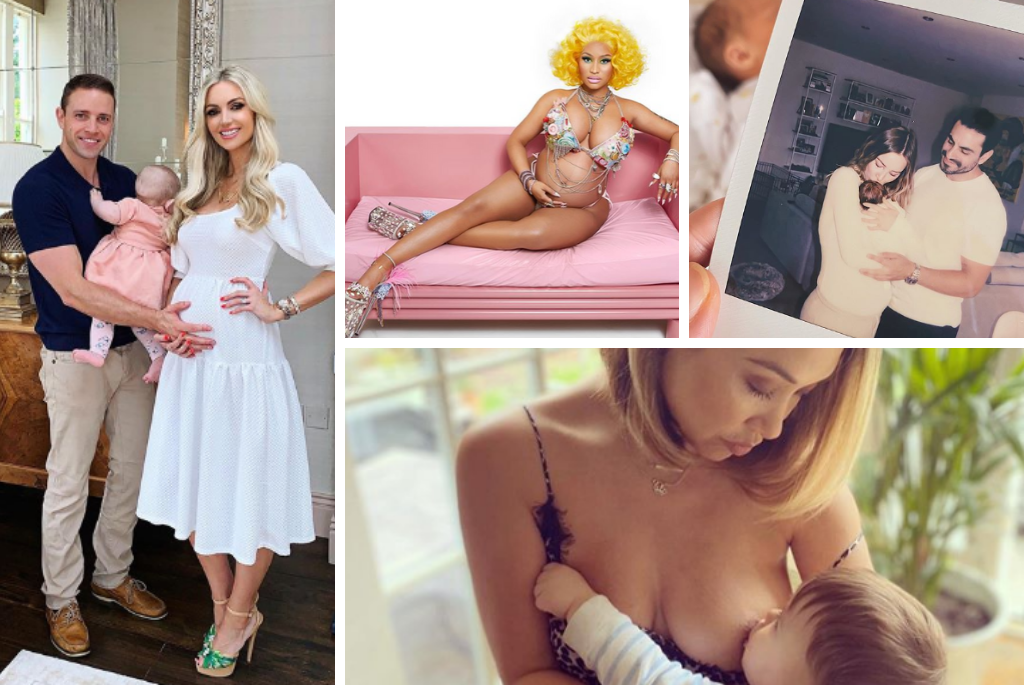 There is a lot of drama in the celebrity world but recently so much has happened when it comes to motherhood, pregnancy and new babies, so here is your weekly dose of celebrity news!

Iskra Lawrence speaks out about the pressures of breastfeeding

In a candid video on YouTube Iskra opens up about how hard breastfeeding is. She posted it on Instagram as well with the caption “Let’s just get to the point. Breastfeeding is hard af!…And it’s not ok that so much pressure is put on women to be able to do it. Or that you won’t have the same connection if you can’t breastfeed – that is BS. It’s not “breast is best” it’s “fed is best”… I wish I wouldn’t have put so much pressure on myself surrounding breast feeding. I wish I had a formula ready that my baby liked, and not been afraid of using it.”

She talks about how breastfeeding is a beast and the best positions to breastfeed your baby if that’s what you choose to do.

Myleene has taken to social media to defend her choice to post pictures of her breastfeeding her child. She said she feels that she has been “chastised” by all of the mum-shamers in her post.

She has been “exclusively breastfeeding Apollo for 11 months” and said that her aim in posting those photos is to help in “normalising” breastfeeding. No one should feel “embarassed” or “judged” for something so natural.

Motherhood and feeding your child is hard enough without everyone criticising every decision the mum makes. Unless asked for your opinion or advice, maybe lay off giving it!

Lauren Pope welcomed a baby girl with her boyfriend Tony Keterman. She took to Instagram with an adorable poloroid snap of the three of them, alongside a caption announcing her name. “Our little lady has arrived! Raine Anais Keterman 11/7/20”. The new mum also shared a cute photo of her baby girl holding her finger.

Jools has suffered a total of 5 miscarriages and her most recent one has been during lockdown. She was a guest on Zoe Hardman’s podcast called Made By Mammas, where she admitted to ‘pining for a sixth child’ before her 47th birthday in November.

It has taken a toll on her mentally and when her doctor asked how she was doing she had to think about it. She told Zoe that she is “really good at going ‘Right, I’m pregnant but it won’t work so I’m just going to carry on,’ whilst everyone gets really into it and I have really learnt to not because I’m kind of not very positive about it.”

She couldn’t love her kids more and she stated that “We have created 5 wonderful children and lost our 5 little stars in the sky.”

Nicki Minaj announced she is pregnant

Nicki Minaj announced that she is pregnant in a beautiful bump photo with the caption “preggers”. The rapper has spoken about how she has always wanted a family and now she is “overflowing with excitement & gratitude”.

In a series of photos posted to Instagram she showcased her bump in a floral and sequin bikini.

Speaking to Glamour magazine, Millie says that she is coming to terms with how her body has physically changed after the birth of her child. Millie has been very open when speaking about all things motherhood and this is no different.

She said that her pre and post pregnancy body look like two different people but that she is fine with it. She added that although she has started to work out again she isn’t trying to get her body back because she hates that term. “I think it’s a new body, it’s different, you’ve given birth. So, it’s not your old body anymore.”

Rosanna welcomed her first child via surrogacy back in November and has now announced she is finally preganant with her miracle twins. She took to Instagram to announce the beautiful news, that after 14 pregnancies resulting in miscarriage a miracle pregnancy has happened. Pregnant with identical twin boys, Rosanna said that “We’re absolutely thrilled to complete our family”.

You can read more about Rosanna’s surrogacy journey here.

Lisa Snowdon “made peace” with not having kids

In a recent interview Lisa revealed that she has “made peace” with the fact that she wont be having any kids with her fiancé. She told OK! magazine that she knows that “being a mum wasn’t meant for her in this life”. Lisa said that she has a wonderful relationship with her nieces and nephews, so she doesn’t feel like she is fully childless.

Being a mum isn’t meant for everyone and just because someone doesn’t have their own biological kids, it doesn’t mean that they aren’t fulfilled in so many other ways.